Halifax in 8 hours or less! 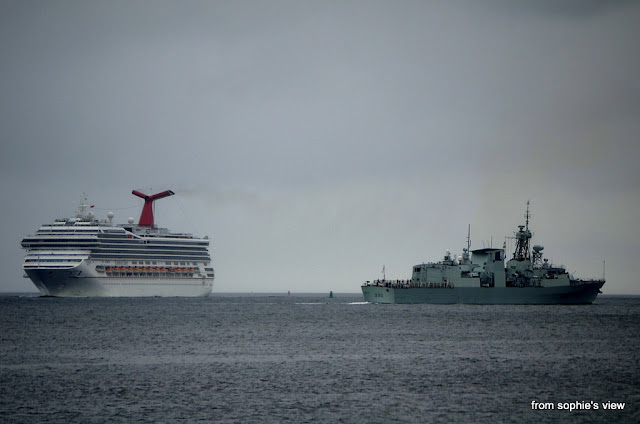 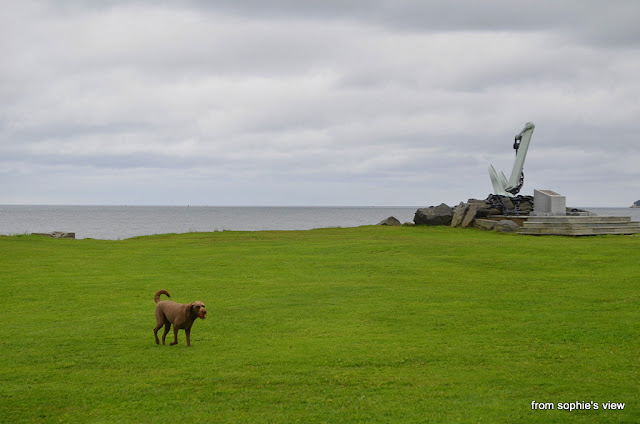 Welcome back as I continue with my tour ~~
firstly at point Pleasant Park.
Because it is before 10 a.m.
I am permitted to roam this area....YAY!!
This is a huge anchor from the HMCS Bonaventue
(historical info just click above ^^^)
a mammoth aircraft carrier
serving the Canadian Navy from 1957 to 1970. 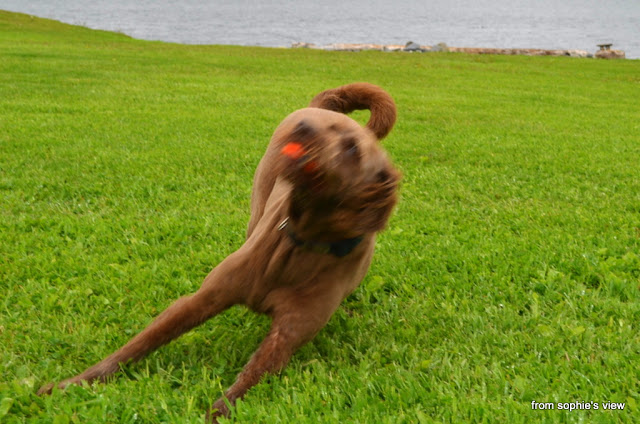 I have everyone in pleasing 'Sophie mode'.
Mr. Orangie is caught in mid-air. 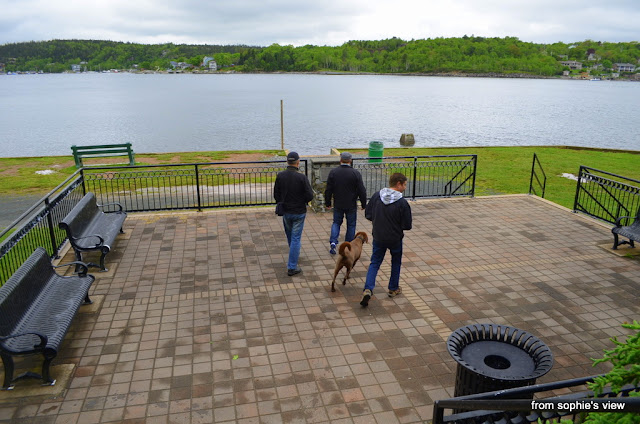 On the other side of the park is Purcell's Landing,
where I go swimming all the time
but not today
just a little too busy for that. 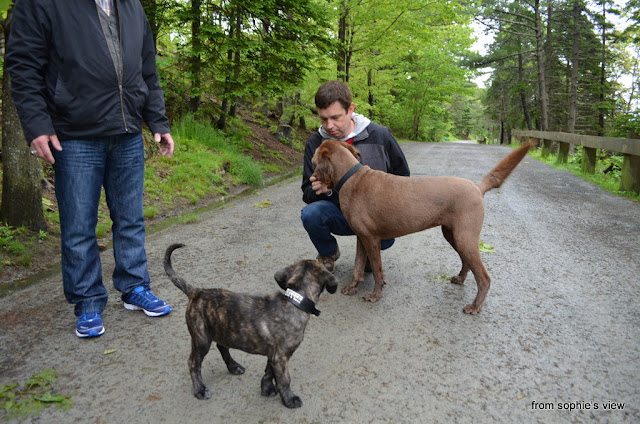 We met this puppy, a Mastiff mix.
I'm bigger now but give it a month
and she'll tower over me. 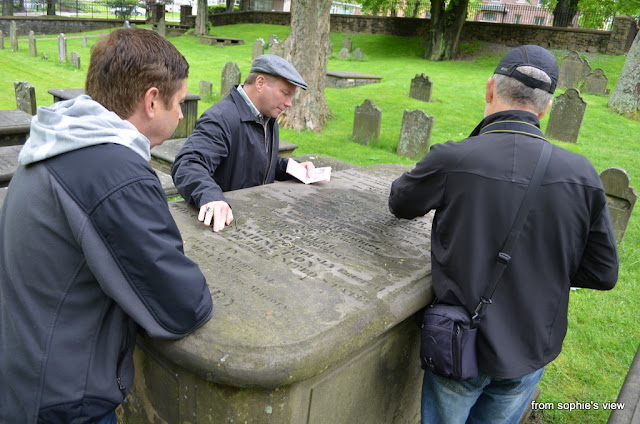 Cemeteries were on the agenda,
so The Old Burying Ground was first. 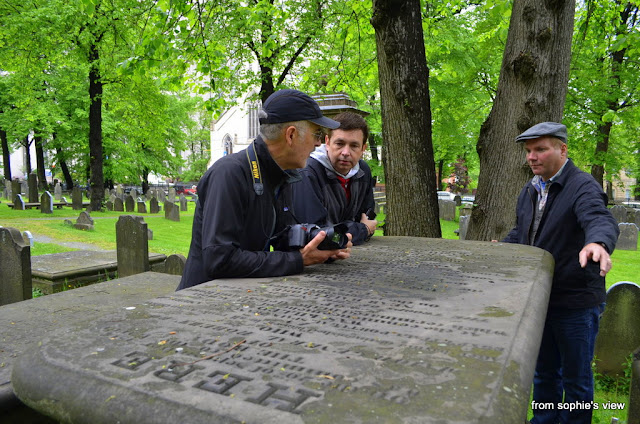 The information was gleaned from the headstones
as well as from a student from a local university
on his summer job really helped to put the history
of the City of Halifax,
Nova Scotia,
Canada,
United States,
Britain
and
France
into a perspective I had never encountered before. 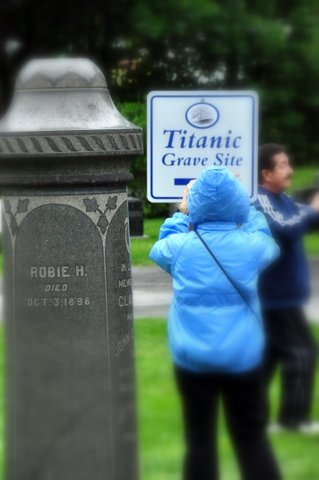 After a leisurely lunch at a local Greek Restaurant
called The Blue Olive Taverna
we visited the Titanic grave site. 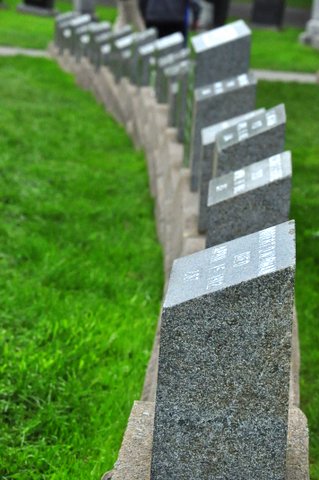 The grave stones are very orderly
with everyone of them inscribed with the same date.
This is when it really hit home,
the scope and magnitude of this tragedy. 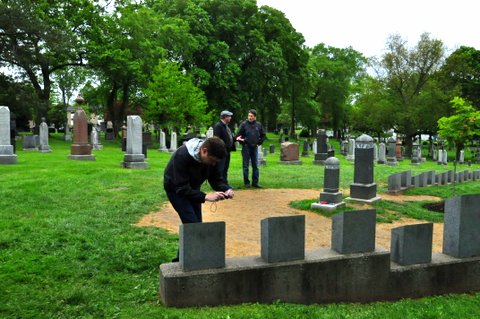 Ed and I are standing in front of the headstone of the unknown child
Sidney Leslie Goodwin
while Stew takes a video of the grave stones. 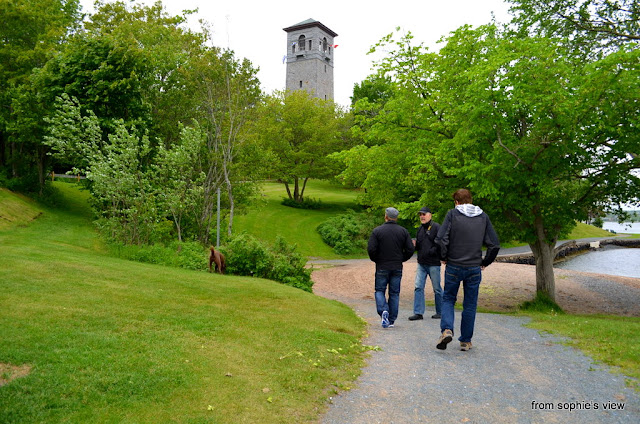 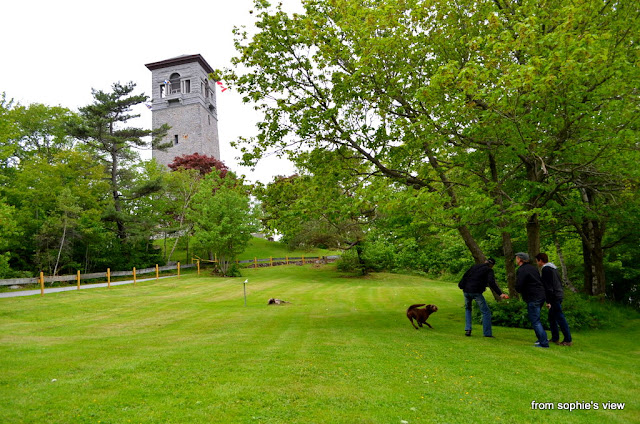 See me, on the lawns in front of the Dingle Tower
which we visited last year with Mim and Maggie,
We are getting closer this time! 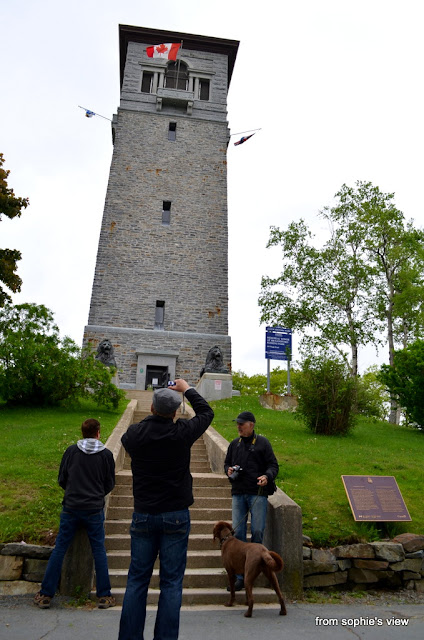 The Dingle Tower is open to the public
and up to the top we go!! 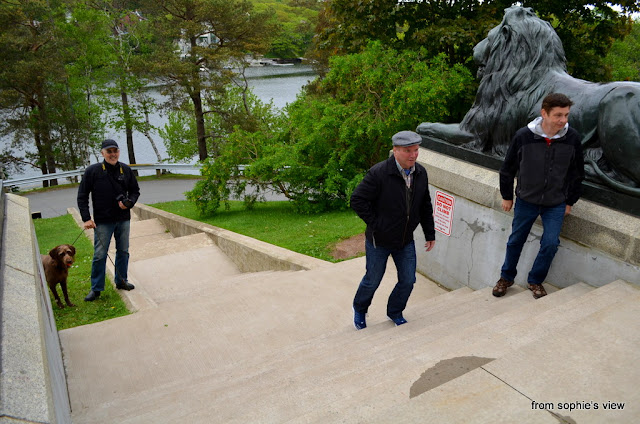 Stair climbing ~~
well, I can handle that very easily! 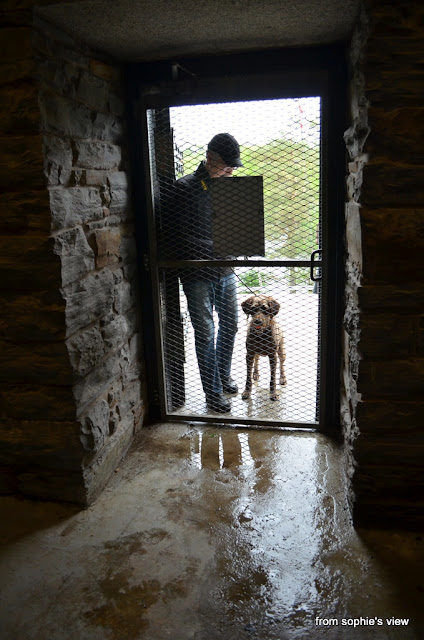 Huh?
What do you mean doggies aren't allowed.
Rules, aren't they made to be broken?
Not this time I guess! 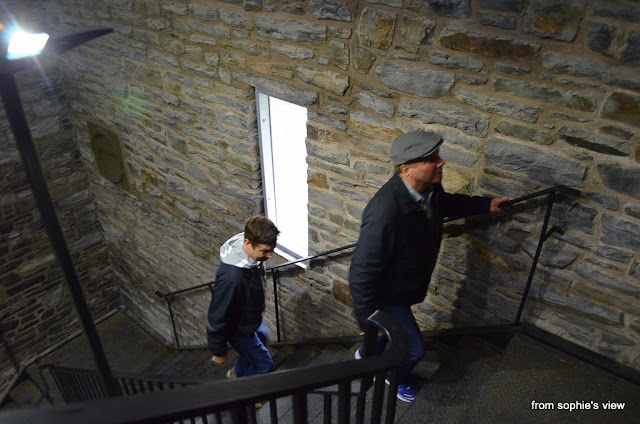 So 'up' they trudged ~~
100 + steps
I could here Ron saying
his quads were aching!
I'd have scampered so fast up them
I just know I would have. 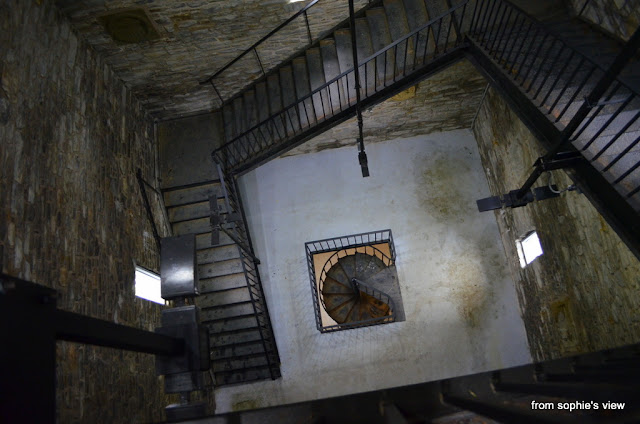 Getting to the top finally
and looking down.
Looks like an M.C.Escher picture! 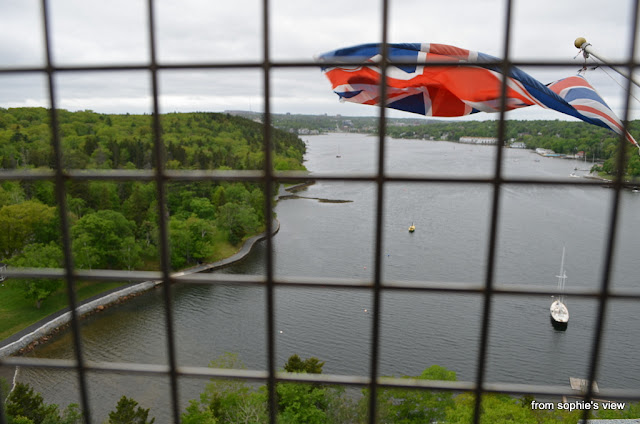 North view of the North West Arm
with an added touch of Ol' Britannia!!
(you'll see the vessel on the right in a picture 5 below) 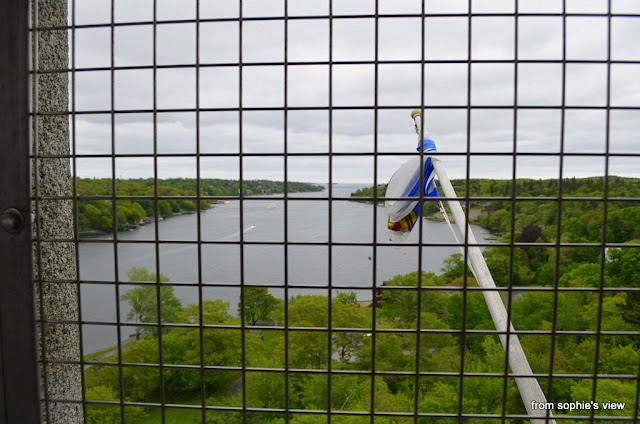 South view of the N.W. Arm
with Point Pleasant Park in the far distance
-left point-
and a furled (sort of) flag of Nova Scotia! 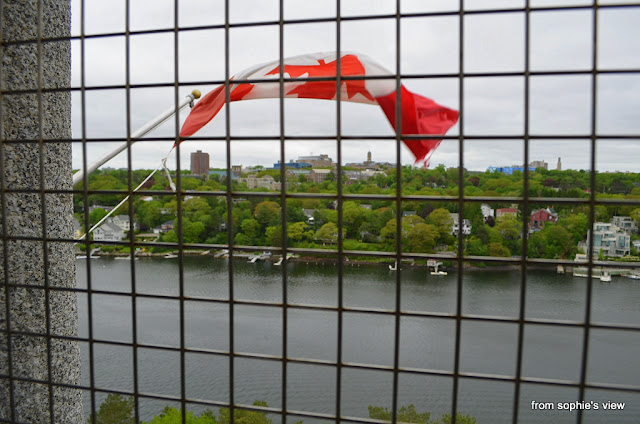 Eastern view of City Of Halifax
with Dalhousie University
center spire
with the Canadian flag accenting all. 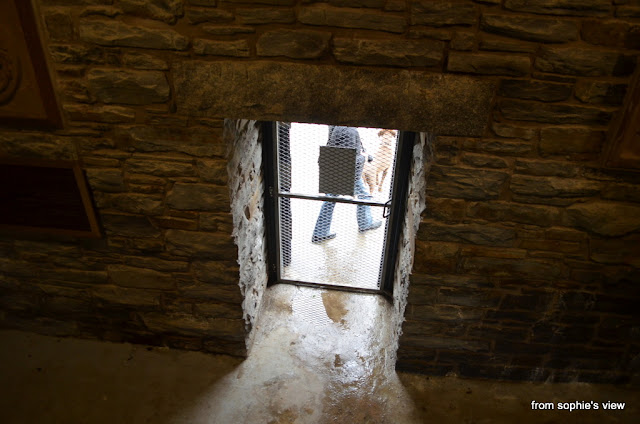 Waiting proved to be too much for me
so Jim and I
walked around a bit. 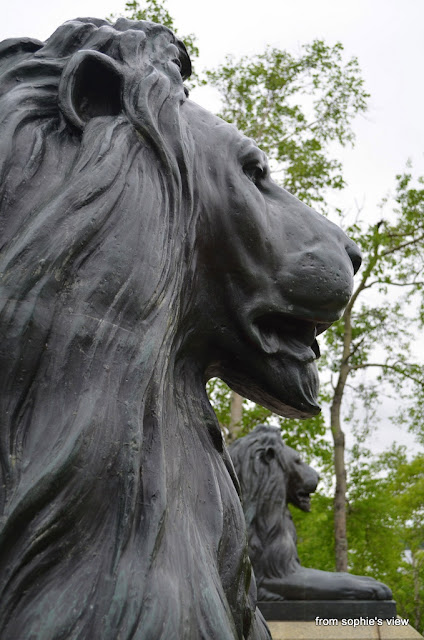 We checked out these 2 lions guarding the Dingle Tower,
regal comes to mind. 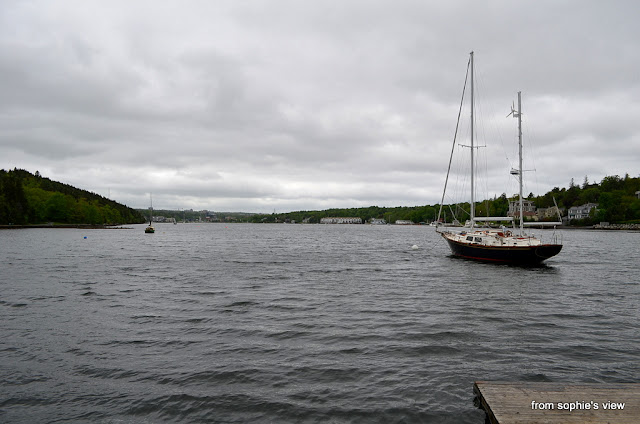 So finally we descended down from the Tower
and worked our way to the seawall.
In front of us was an anchored vessel
not quite ready to venture out on the high seas today. 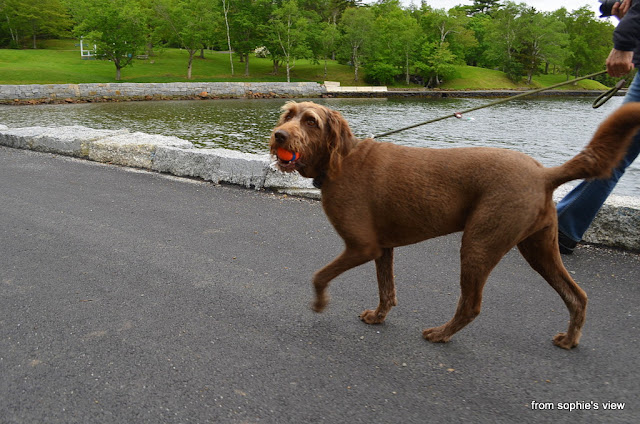 I sure hope you were able to follow this lengthy
sojourn today.
I know I had a grand time showing my blog buddies
Stew and Ed
a few spots of Halifax.
Next time some cyber-buddies visit
we'll check out some other unique
Nova Scotian haunts,
as in ghost haunts!
OoooooOOwwwwooOOOo!!
Posted by fromsophiesview at 10:43 PM